CFP: ‘The Magic Lantern in Leisure, Entertainment and Popular Culture’ – International Conference in Antwerp (BE), 5-7 May 2022 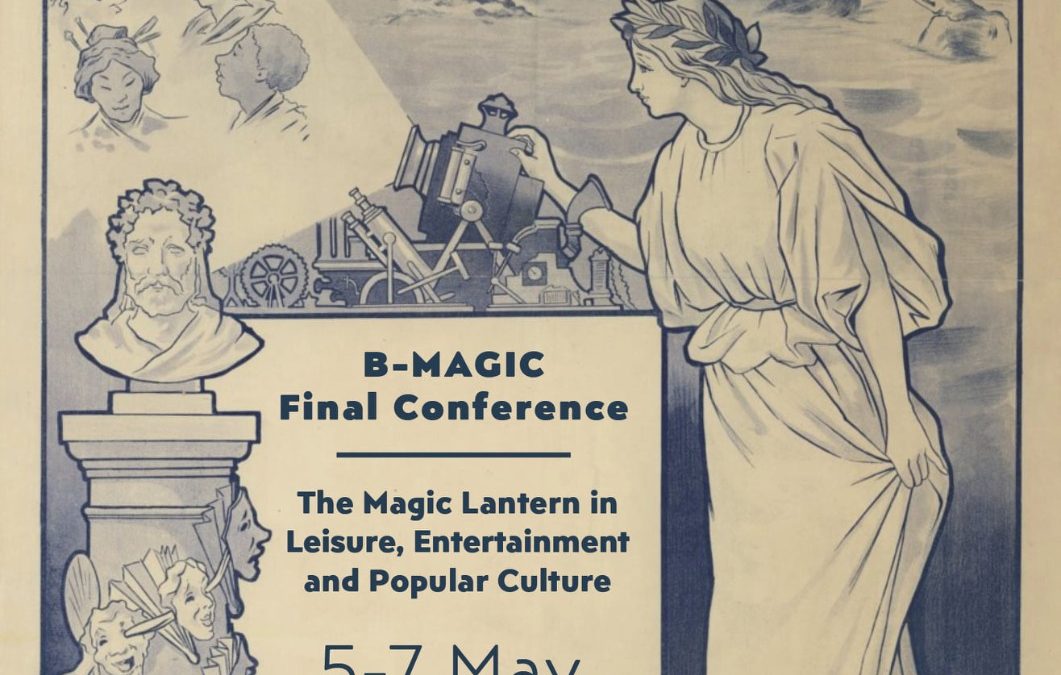 Call For Papers ‘The Magic Lantern in Leisure, Entertainment and Popular Culture’
B-magic Final Conference in Antwerp (Belgium), 5-7 May 2022
(Pre-conference Event in Brussels, 4 May 2022)
www.B-magic.eu/final-conference

The magic lantern played a crucial role in the emergence of modern leisure, entertainment and popular culture from the mid-eighteenth century onwards. This early projection technology was used to delight and instruct in many different ways. The device inspired awe and wonder, and at the same time its instructional capacity was highlighted and praised. The lantern was either the centrepiece of the performance or part of a complex scenography and functional arrangement. The modern era in general witnessed a proliferation of visual media performances and exhibitions, encouraged by the burgeoning rise of new sciences and technologies, and supported by changes in transportation, communication, education and social mobility. These popular events were part of nascent culture industries that took root in learned environments and lecture halls, but also in theatre and opera houses, spilling out into public space, the boulevards and the fairgrounds. Academics and science enthusiasts but also illusionists, artists and amateur savants shared a knack for understanding what would entice different audiences, coupled with a delicate balance between scientific demonstration and sensational entertainment. While relying on international networks, lantern performances in particular contributed to the circulation of knowledge, technologies and visual culture between European cities and across the Atlantic.

This conference aims to bring together new research and scholarship on the many uses of the magic/optical lantern within the changing urban leisure and entertainment contexts from the middle of the eighteenth to the first half of the twentieth century, across geographic and cultural boundaries. The goal is, eventually, to elicit an interdisciplinary and transnational dialogue on the increasing importance of visual media and its performative use in metropolitan life. Urban leisure and entertainment increasingly turned into a vector of capitalist control through its close entanglement with actions of commodification. At the same time, leisure and entertainment fostered new forms of urban liberation and emancipation: enjoying leisure signaled free time, to be unburdened from work and the daily rhythms of life, to have time (and money) to spend, to participate in a new culture of multi-sensory amusements and spectacular realities that were to be part of the foundation of modern mass society.

The conference aims to bring scholarship on popular culture and urban modernity in dialogue with its concrete, material media remnants by discussing the role and impact of the magic (or optical) lantern, amidst many other new visual and theatrical media and technologies. The lantern appeared in a variety of contexts, developing different sub-texts, addressing different audiences and producing different modes of reception. We aim to make the magic lantern central to unlocking various facets of the history of popular culture. Therefore, we are especially eager to receive contributions linking the use of the magic lantern in leisure and entertainment contexts to modern culture and urban change.

We invite contributions in different formats and from different disciplinary perspectives, addressing one or more of the following subjects: the use of the lantern in popular entertainment and leisure culture,
● by different types of showmen and -women;
● within its trajectories along new urban city centres and suburban areas;
● in different types of performances and new types of attraction (theatre, opera, circus, scientific shows, lecture-performances…);
● in an increasing diversity of venues (tents, booths, theatres, opera houses, cabarets, music-halls, lecture halls, schools…);
● amidst the spread and application of other visual media;
● consumed by different audiences and new social classes;
● crossing with education, religious propaganda, political propaganda, science and knowledge communication;
● influenced by broader historical processes such as urbanisation, political emancipation, migration, tourism…
● intertwining different disciplines such as (cultural) history, art history and aesthetics, performance studies, media archaeology, history of science and technology, urban studies, geography, tourism studies, migration studies, digital humanities…
● …

The conference will present and discuss the outcomes of the B-magic project (www.B-magic.eu) and share them with all those interested in the magic lantern and lantern slides from a scholarly, historical, archival, curatorial, artistic, museological, educational or practical point of view. The programme will also contain magic lantern performances, a special event on the Kaiser-Panorama, an exhibition, book launches and a media archaeological (book) market.

Deadline and format for submissions
Proposals for individual papers, thematic panels, poster presentations, lecture performances and lantern demonstrations can be sent to B-magic@UAntwerpen.be before 1 October 2021. Please include an abstract (max 300 words), five keywords and a brief academic biography. Acceptance will be announced early December 2021. The conference will take place in the Photography Museum (FOMU) of Antwerp, Belgium.
The conference is organised by the research groups Visual Poetics and the Centre for Urban History of the University of Antwerp in the framework of B-magic, an Excellence of Science project (EOS-contract 30802346) supported by the Research Foundation Flanders (FWO) and the Fonds de la Recherche Scientifique – FNRS.

More information about the conference will be regularly updated via the Conference page : www.B-magic.eu/final-conference