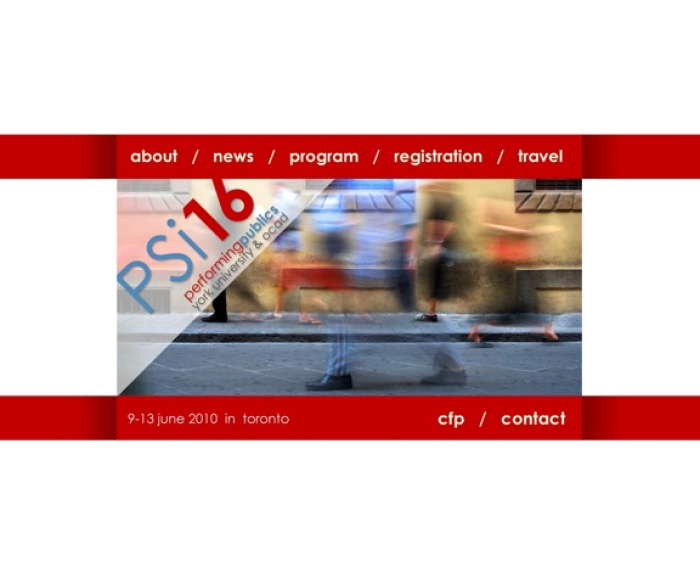 9 – 13 June 2010, Toronto
Performing Publics, PSi 16, took place in Toronto from 9 June 2010 – 13 June 2010, and it was organized by York University and OCAD University. The conference theorized the relationship between performance, public culture, and the production of what Michael Warner calls “counter-publics,” social formations developed in opposition to the discourses and interests of the “official” public sphere. As such, it explored the coming together of individuals as a social totality—as a community, nation, organization—and the enactment of “public” as a form of social activism, as a means of rehearsing, querying, and producing alternative forms of local and global citizenship. In both contexts, performance has the potential to frame affective and critically nuanced responses to public events, issues, and crises and thus to model politically and ethically engaged forms of public life. The conference also sought to problematize the idea of “publics” as it has been applied to performance by exploring the limitations of this term and the kinds of social exclusions that it often has been used to rationalize.

Guiding questions included: How are we hailed by various publics, and how does this shape our behaviours and social interactions? How are publics spatially and temporally constituted? In what ways do publics participate in forms of activism, civic engagement, and “poetic world-making” (Warner)? What affects and effects are produced by such utopian interventions? Our discussion of these issues reflected the vibrant history of urban intervention and “public spacing” movements in Toronto where artists and activists have worked together to change the shape of our shared local and civic spaces.

The conference engaged 523 participants from around the world, included 5 days of fascinating presentations and performances, and has played an important role in galvanizing performance studies in Canada. The conference helped to bring together a number of artists and researchers in the region who might not otherwise have had the opportunity to work together and share their work. It also created important local connections between the Faculty of Fine Arts at York University and OCAD University (the two major partners organizing and hosting the event), as well as other Toronto organizations, including the Centre for the Study of Drama, Buddies in Bad Times Theatre, the Luminato Festival, and FADO Performance Art Centre.

Several publications arose from the conference, including a special issue on “Performing Publics” in Performance Research (vol. 16, no. 2) and a special section of Canadian Theatre Review (vol. 149) on “Performance Studies in Canada.”